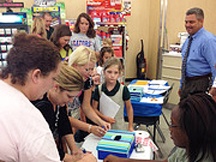 Students, parents and Headmaster Steve Smith from Columbus Charter School have some fun with Math Night at the Food Lion in Whiteville, NC

WHITEVILLE, NC: August 22, 1012 – “I love math!” stated Izzie Rogers, a kindergarten student at Columbus Charter School.  She was referring to all the fun she was having shopping and calculating groceries at the K-3 Math Night at Food Lion in Whiteville.

“One of the most important ways we can improve instruction is to make learning fun and relevant,” said Columbus Charter School (CCS) Headmaster Steve Smith. “What better way to see how math is used on a daily basis than to visit the grocery store and use those skills to shop!”

Vanessa Smith, Customer Service Manager for Food Lion #2526, coordinated the kindergarten through third grade Math Night at the Food Lion Wednesday evening August 22, 2012. Math Night according to the Food Lion website, “… is transforming the store into a living classroom. By partnering with their local elementary schools, families have an opportunity to work together and apply math skills in a fun and friendly environment.” 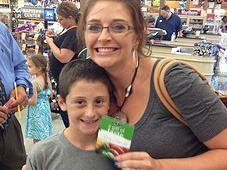 Food Lion provided math worksheets, tailored for each grade level, as students entered the store with their parents. CCS Administrators Steve Smith and Michelle Mena greeted them as well with instructions for the event. Students and parents worked together to complete their math sheet by searching for items and prices throughout the store.  They used basic math facts for calculations and estimations. As they completed their sheets and turned them in, they were given a gift bag filled with goodies and directed to the deli for a hotdog, jello-cup and drink.

Each parent and each student also entered their names into a drawing for prizes that were awarded throughout the event. Joshua Shaw, of Whiteville, went home as a very happy CCS second grader since he won the basketball goal he had his eye on as soon as he walked in the door. 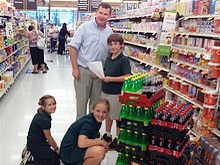 “Many thanks to the Food Lion staff for being such wonderful hosts and for supporting Columbus Charter School,” stated Michelle Mena, Assistant Headmaster of the CCS Elementary school. “It was an evening filled with learning, fun, and community partnership.”

The Roger Bacon Academy – Columbus Charter School is a tuition-free, open enrollment K-7 public school in Whiteville, North Carolina. Since 2007, the school has focused on quality education and is a premier performance-driven year round school. Widely recognized as a compelling choice to conventional public education, the school has built a reputation for dedicated and highly qualified teachers that give students a strong and proven academic foundation. The Roger Bacon Academy schools have received numerous awards, including the designation of being a Top-25 School for Academic Growth and of Excellence in the state of North Carolina.