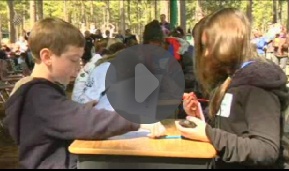 Instead of watching the clock, students at Roger Bacon Academy are racing against it.

Tuesday morning, the horn blew for the start of the 7th annual FASTAR (Fluent Academic Skills Tournament for Arithmetic and Reading). About 200 student “racers” and their parent “crew chiefs” competed in several rounds of timed math and reading tests.

The idea is to tune their academic skills for time and accuracy, allowing them to take on bigger academic challenges.

The experience becomes exciting with a large cheering crowd of classmates and trophies.

During February, students and parents practiced after school for the main event. Many parents were in the audience as their children competed.

Students at the Leland campus received trophies later in the afternoon. Thursday, students at their sister school in Columbus County will also compete.