April 7-10, 2015- For those of you bemoaning the end of The Roger Bacon Academy’s first annual Shakespeare Festival, be heartened by these words from The Bard:

“The golden age is before us, not behind us.” 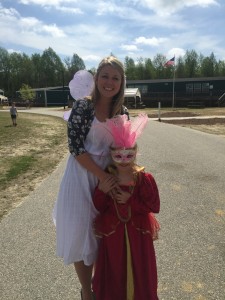 A great success, Shakespeare Festival will be back next year, bigger and better. Accomplishing this will require near-visionary creativity, however, as in its first year, the event included plays, live animals, and even sword fightingStudents from Leland’s Charter Day School and Columbus Charter School, in Whiteville, returned from Spring Break last week in a carpool succession manned by teachers in ruffs, mustaches, and berets, evoking Shakespeare.

As tuition-free public charter schools, the schools have the freedom to offer a unique classical curriculum that prioritizes history and the arts. Open to any student who enrolls, the schools successfully facilitate their classical curriculum by using age-adapted versions of canonical literature in grades K-8. Shakespeare Week provided students a treat to both reward and inspire their diligence in learning the rigorous material. 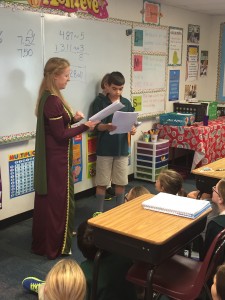 On day one, Barnes and Noble representative Marilyn Shackleford introduced students to Shakespeare by presenting biographical information with storytelling, props, and activities. Curriculum Coach Ali Cause-Nance visited classrooms while dressed as the character Miranda from Shakespeare’s The Tempest, where she led readings and student dramatizations of the play’s intense opening scene of a boat at sea being ravaged by—as indicated by the work’s title—a tempest. 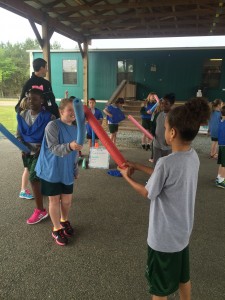 Students practice fencing in PE by reenacting a duel scene from Romeo and Juliet.

Shakespeare Week concluded with a day of drama. For elementary school, UNCW Shakespearean professor, Dr. Lewis Walker, performed songs from Shakespeare’s Twelfth Night on his ukulele. He brought along a Master’s student who performed soliloquies from The Two Gentlemen of Verona. Middle school was treated to performances from UNCW’s theater department, where Professor Christopher Marino led UNCW performers in scenes from A Comedy of Errors, Romeo and Juliet, and Hamlet.

“There was an enormous amount of personal satisfaction in this event,” stated event organizer and Dean of History and Language Arts, Doug Franks. “As a student, Shakespeare was one of the few things I connected with. I became a teacher to help other students find these connections.”

“Thanks to the various volunteers and organizations that joined us in this event, nearly 2,000 students in our area were able to connect Shakespeare to something relevant in their own community,” he continued. 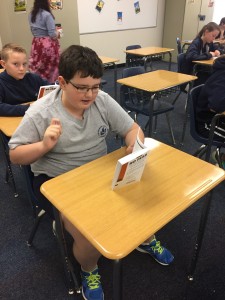 In addition to the fun, students engaged with the challenging texts.

In addition to Charter Day School and Columbus Charter School, the newest members of the family of public charter schools managed by the Roger Bacon Academy, Inc. are Douglass Academy in downtown Wilmington, opened in 2013, and South Brunswick Charter School in Southport, opened in 2014. All four schools are currently accepting enrollments for the 2015-2016 school year online or in-person. For more information, visit www.rogerbacon.net or call 910.655.3600. 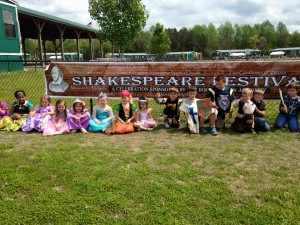 Students wore their Shakespearean best to close out the festival week!