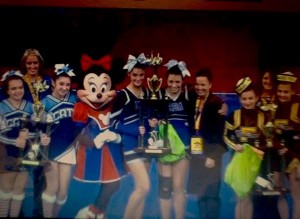 Broadcast on ESPN, the week-long competition saw more than 400 teams from across the nation compete in their respective divisions. RBA had all four of its teams qualify for nationals, with each team securing an award in its division. Two teams, the Midget and PeeWee, won first place National Champion titles in the highest difficulty Level 4 division. The Junior PeeWee squad won the “Spirit of Sport” Award, and the Junior Midget team placed fifth in the Nation, having only been established four months ago in August.

Jean Lafave coaches each RBA squad and has built an impressive career of grooming six National Champion squads in four consecutive years—a record that would likely make a high school football coach a local legend. A volunteer, Lafave credits her successes to the hard work of her cheerleaders and the dedication of their parents, many of whom volunteer as assistant coaches.

One such parent coach, Brett Tharp, attributes the squads’ successes to community support— “These successes are the result of great support from parents, the school, and the community. Because of this, our girls expect to succeed in everything they do, and we are proud of their accomplishments on and off the mat.”

The squads are composed of 100 e

lementary and middle school students from Charter Day School in Leland and Columbus Charter School in Whiteville. The public charter schools are also the highest scoring in their respective counties on End of Grade tests. The schools also offer a Pop Warner football program and have a current, 5-time State Champion Archery program.

Head Coach Lafave states, “I am truly blessed for the opportunity to coach these squads. This was a week of dreams coming true, as two squads of girls learned how it felt to be named a National Champion, another squad won a national award for their character and spirit, and another group of girls who began cheerleading four months ago won fifth place in the nation.”

“More than national titles, these wins are a deeply-felt example of hard work translating into success for pre-teen and teenage girls. I like to think that the ESPN broadcast and trophies help to ensure that the lesson is remembered for life,” Lafave adds.

Parent Adam Butler’s experience confirms this, stating that, “It is amazing to see the girls rewarded for all of the hard work they have put in over this season. RBA cheer has helped my daughter to understand what commitment, dedication, and perseverance mean and has brought those lessons back into her school studies. I couldn’t be more proud.”